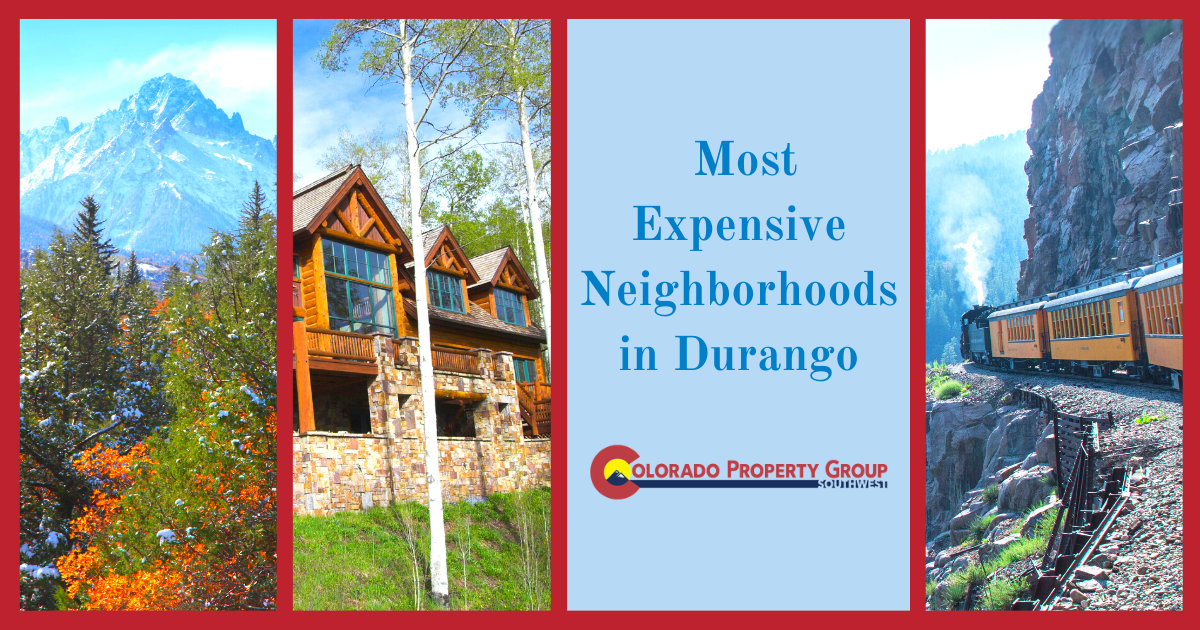 The city of Durango is located in southwest Colorado, where about 19,097 residents call the city home.

In Colorado, Durango is a great vacation destination. Winter brings the opportunity for skiing and other winter pursuits, while summer—when the bulk of the city's tourism occurs—appeals to those seeking the chance for hiking, biking, rafting, and other outdoor activities in Durango against the city's scenic backdrop.

Durango has preserved the history of its western heritage through museums and historic attractions. The city also offers a thriving arts community, with the downtown area showcasing a dozen galleries. In addition to being a business center, Durango's historic downtown is a popular destination for dining, shopping, and nightlife.

With so much to offer, why wouldn't anyone want to live in Durango? If you love the great outdoors but want to enjoy the luxuries of a high-end home, there are a number of upscale Durango neighborhoods, including these seven top choices.

Durango's Historic Downtown neighborhood is where the city's historic Old West heritage collides with today's modern Southwest metro center. This neighborhood is a National Registered Historic District, revered for its historic buildings, including quaint, boutique hotels. The district is also the home of award-winning restaurants, popular brewpubs, unique shops, and museums. Durango has fostered a thriving arts community, showcased in the many art galleries dotting the downtown, where visitors can find the Durango Arts Center.

The adjacent Animas River adds to the beauty of Historic Downtown Durango. The district features Schneider Park, with riverfront access and trails. Downtown also offers a number of other parks, including Rotary Park, Buckley Park, and Iris Park. Additionally, the Historic Downtown neighborhood features a number of tourist attractions and destinations, including the American Dream Display and the Durango Welcome Center, as well as rafting, tour, and outfitting companies.

Ptarmigan Farms is a country subdivision located outside the Durango city limits. It is popular with those looking for the ideal setting to raise horses, as well as homeowners seeking to relocate to a waterfront property.

The land developed as Ptarmigan Farms was previously used for farming or as grazing land. Because of that, there are no natural trees in the neighborhood. The neighborhood's natural surroundings are enhanced by the Animas River, which runs through many of the lots on the western portion of the neighborhood. Some homesites feature a meandering stream or creek.

Wildlife lovers will find the rural setting appealing, as it serves as wintering grounds for hundreds of elk. The proximity of the river also brings a number of birds to the area. A portion of the property to the west of the residential development is protected with conservation easements, which restricts further construction and development. Most of the homes in the subdivision are oriented to the north, offering unencumbered views of the Animas Valley and the river itself.

The Rafter J Homes neighborhood is a rural development with ready access to the city. The land features stately Ponderosa pine trees, with some homesites offering breathtaking views of the surrounding La Plata Mountains. Many homes within the development are not visible when driving through the neighborhood because they are hidden by surrounding trees.

The Red Rock Ranch neighborhood is an upscale subdivision in a rural setting outside Durango. It is located north of the Animas Valley, east of state highway 550. The development is known for its expansive lots. Residents can enjoy a park near the entrances, as well as a number of meandering streams flowing throughout the neighborhood.

The neighborhood's northeast and western borders are punctuated with large, older trees. Additional landscaping has been added as the subdivision developed. The subdivision's homeowners association provides strict landscaping requirements to ensure the integrity of the development. Homesites range from 0.9 to 1.5 acres. Despite its rural setting, residents can enjoy central sewer, water, and natural gas services, along with the quiet and seclusion of properties set well off the highway.

The Dalton Ranch neighborhood is a golf course community, first developed around 1992. As river bottom property, the lay of the land is very flat. All streets are paved, and residents enjoy access to central water and sewer.

Some homesites run adjacent to the golf course. The neighborhood is divided into north and south parcels by Trimble Lane. South Dalton was developed first, with single-family homes and about 20 detached patio homes. The north development is dominated by condominiums and townhomes. It is also the section containing a gated community of high-end, luxury homes.

The Dalton Ranch golf course plays from four different tees, causing course length to vary from 5,500 yards to about 7,000 yards. The course is unique in that nearly every hole contains a water hazard. The semi-private course includes a well-appointed clubhouse with swimming pool, fitness facility, tennis courts, and dining, among other amenities. It has been ranked among the top 10 public golf courses in Colorado.

The Ute Pass Ranch neighborhood is a rural subdivision located northeast of Durango, off Florida Road. It was first developed in the early 2000s. Ute Pass Ranch contains about 68 homesites, with lots varying in size from 1/3 of an acre up to a sprawling four acres. The larger homesites tend to be those situated at the end of streets. Some lots offer scenic views of the nearby La Plata Mountains.

This subdivision includes central water and sewer, in addition to paved roads. Ute Pass Ranch features an expansive common area at the heart of the neighborhood, which splits the subdivision into two portions. The common area's sizable hill is a favorite spot for hiking and sledding.

Los Ranchitos is a rural residential subdivision, located about 15 minutes from downtown Durango, with two entrances from the north side of Florida Road. Residents of Los Ranchitos enjoy timbered lots dominated by Ponderosa pine, along with some spruce trees and a few Aspen. There are also some deciduous trees dotting the banks of the river. Residents can expect to enjoy viewing a number of wildlife species, including deer, elk, and bears.

About eight to 10 lots feature open pastureland, suitable for horses. Homes on the south end, or river section, are more expansive than the remaining areas. A few lots on the south side adjoin about 1,000 acres of Bureau of Land Management land.

The overall terrain of Los Ranchitos is rolling, though the land rises toward the northern border. Three lots at the very top of the subdivision are adjacent to national forest land. The west border of the neighborhood adjoins Colorado Trails Guest Ranch, allowing for an expanse of undeveloped land adjacent to homesites there.

Residents of Los Ranchitos can enjoy central water, with homesites requiring individual septic systems. Although accessible from the city via a paved road, all roads within the subdivision are graveled and maintained by the homeowner's association.

Durango is a city rich in Western history, adding to its appeal as a year-round tourist attraction. In addition to a golf community, some of its most affluent neighborhoods offer country settings and can be found on the outskirts of the city. Although offering privacy and seclusion, these neighborhoods also provide ready access to downtown Durango as well as the region's ski areas.

Wooded homesites, abundant wildlife, the ability to keep horses, and quiet surroundings are some reasons why homeowners are choosing rural developments when buying or building their homes in the Durango area. Although a country setting, many of these neighborhoods also offer urban amenities like central water and paved roads.